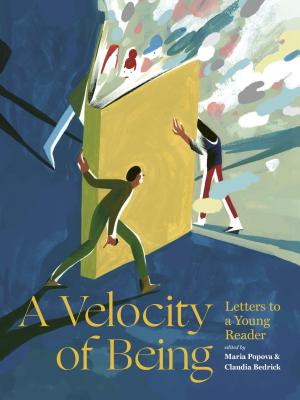 A Velocity of Being: Letters to a Young Reader

“If you love to read, or learn to love reading, you will have an amazing life.  Period.  Life will always have hardships, pressure, and incredibly annoying people, but books will make it all worthwhile.  In books, you will find your North Star, and you will find you, which is why you are here.”   - Anne Lamott

A Velocity of Being is a grand and delightfully illustrated celebration of reading. In these magical pages, 121 of today's most wonderful culture-makers―writers, artists, scientists, entrepreneurs, and philosophers―write letters to young readers reflecting on the joys of reading, how books can broaden and deepen human experience, and the ways in which the written word has formed their own character. Accompanying each letter is a colorful illustration by a celebrated illustrator or graphic artist that represents their visual response.

Eight years in its making, this book is a labor of love and beauty by two women, an American woman who traveled the world researching book illustrations and a Hungarian immigrant who loved reading.  They eventually met, having circled each other unwittingly for years, around their shared ardor for story and image. The women met during the early days of ebooks and the golden age of social media, when the very notion of reading was becoming tattered by the fragmentation of the Web.  They found solace in a beautiful essay by Herman Hesse titled, “The Magic of the Book.”  Decades before the advent of the internet, Hesse wrote, “We need not fear a future elimination of the book.  On the contrary, the more that certain needs for entertainment and education are satisfied through other inventions, the more the book will win back in dignity and authority.”  And so they began reaching out to some of the people they most admired, inviting each to write a short letter to the young readers of today and tomorrow about how reading sculpted their character and their destiny.  Then each letter was paired with an illustrator to bring its message to life visually.

Though this book is written for young readers, the letters and illustrations are perfect for adults as well.  Even the weight of the paper (nice and heavy) and the beautiful end papers (marbled paper like that used by Laurence Sterne in a 1759 novel set) were considered in the making of this book.  Every aspect of A Velocity of Being has been touched by the editors’ thoughtfulness and care.

This book arrives in our local library just in time for the holidays.  If you are looking for the perfect gift for the young readers in your family or for an adult who loves the written word or who has yet to discover the joys of reading, you could not do any better than this book which is sure to become a treasured classic.

This beautiful project has been woven entirely of goodwill, generosity of spirit, and a shared love of books. Everyone involved donated their time, and all profits go to the New York Public Library systems.

Edited and introduced by
Maria Popova, who has been writing since 2006 about what she reads on Brain
Pickings (brainpickings.org), which is now included in the Library of Congress archive
of culturally valuable materials; Edited by Claudia Bedrick, publisher, editorial
and art director of Enchanted Lion Books.